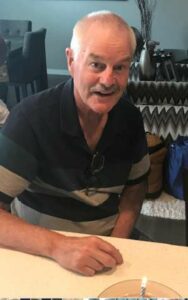 It is with great sadness that our family shares the news of John’s passing at LHSC – University Hospital on Saturday, September 18, 2021, after a courageous battle with Parkinson’s disease.

John was born in 1948 in Temiscaming, Quebec to parents Ken and Ingrid. After graduating high school in Stratford, he went on to study chemical engineering at the University of Waterloo. Graduating in 1971, John began a career in pipeline engineering, working primarily for oil and gas companies, an occupation that would take him to Calgary, Vancouver, and later, around the world.

John was a generous man who volunteered for Meals on Wheels and Big Brothers and Sisters. As a young father, he took great joy in coaching his children’s sports teams. Without a single grumble, he spent a decade taking care of his wife, Beverley, after she had a stroke. He was a lifelong athlete and sports enthusiast: one of the great pleasures of his life was living across from the golf course in Stratford. In the summer months, he would walk across the street nearly every day to play a round or practice his putting.

In the late ’90s and early 2000s, John was thrilled to be able to travel and live abroad while he ran an international engineering consulting company. He and Beverley lived for months-long terms in places like Venezuela, Brazil, and Bolivia. He returned from each trip with unique and interesting art that he proudly hung on the walls of his home.

Donations can be made in John’s name to Parkinson Society Southwestern Ontario or the charity of your choice.

AftercareEssentials Only
Our Essentials-Only service does not include our full in-person Aftercare. We provide you with the forms required to apply for the CPP Death Benefit along with our C.A.R.E. Guide checklist.
Are you curious what our full Aftercare Service offers...
AftercareOur Complete Aftercare Service